In this blog series we would like share some real life stories which explore what it is like to live with Dual Sensory Impairment and the impacts this has on an individuals life, independence, confidence etc

Dual Sensory Impairment can creep up on you over time or in our story below it can happen very quickly and unexpectedly. 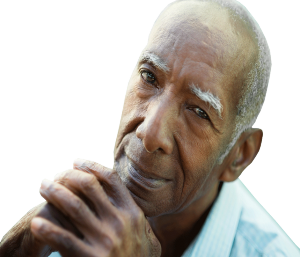 George was living independently when, in hospital for a scan, something went seriously wrong during the procedure.  This led to him losing his vision, he only sees through a pinhole in each eye.

Within a year he lost his hearing as well.  He was 60 years old

George became a virtual recluse, his family 200 miles away.  Depresses and isolated he didn’t know where to turn.

I can’t cope in social settings they are too noisy for my hearing aids.  I worry about answering the front door so much I only answer if I have a planned visitor

Consequences of the incident in hospital were many in addition to the totally unexpected loss of both his sight and his hearing.  He was completely unprepared for life without hearing or sight.  The impact on his daily life was dramatic, things he took for granted and had confidence to do evaporated:

The idea of using a cash machine in the street horrifies me – I won’t know who is watching.

George was extremely low and emotionally vulnerable.  He felt his life and been turned upside down.

It feels that it has been so sudden

He did get valuable assistance from the hospital discharge team and emergency services for his medical and health issues caused by the incident.  But they, like most professionals, did not have sensory loss expertise and awareness and so the impacts of losing his sight and hearing were not properly assessed.  Losing both sight and hearing causes major problems for mobility, accessing information and communication.

Perhaps most importantly, the impact on social contact, self confidence and feeling useful is often missed or underestimated because of lack of awareness.

I would love to be able to go out again an to have someone to have grown up conversations with; and to be useful to someone else.

With support from sensory loss trained people, older people like George can regain their confidence and with some new skills training and equipment can find that living independently is again possible

A friend of George put him in touch with Hi-Vis UK.  We connected him to a local sight loss group to help him get out and about.  We helped him get a Care Act assessment and made sure he had the equipment he needed and how to use it – a doorbell that flashed and vibrated, and alarm clock that gently shakes him awake, raised buttons to stick on his microwave and cooker controls – he now loves to cook.  We also helped him make new friends.

Most of all, he says, it was finding someone like Hi-Vis Uk to

have a grown-up conversation with, who knew how I was feeling that got me through a very dark year.